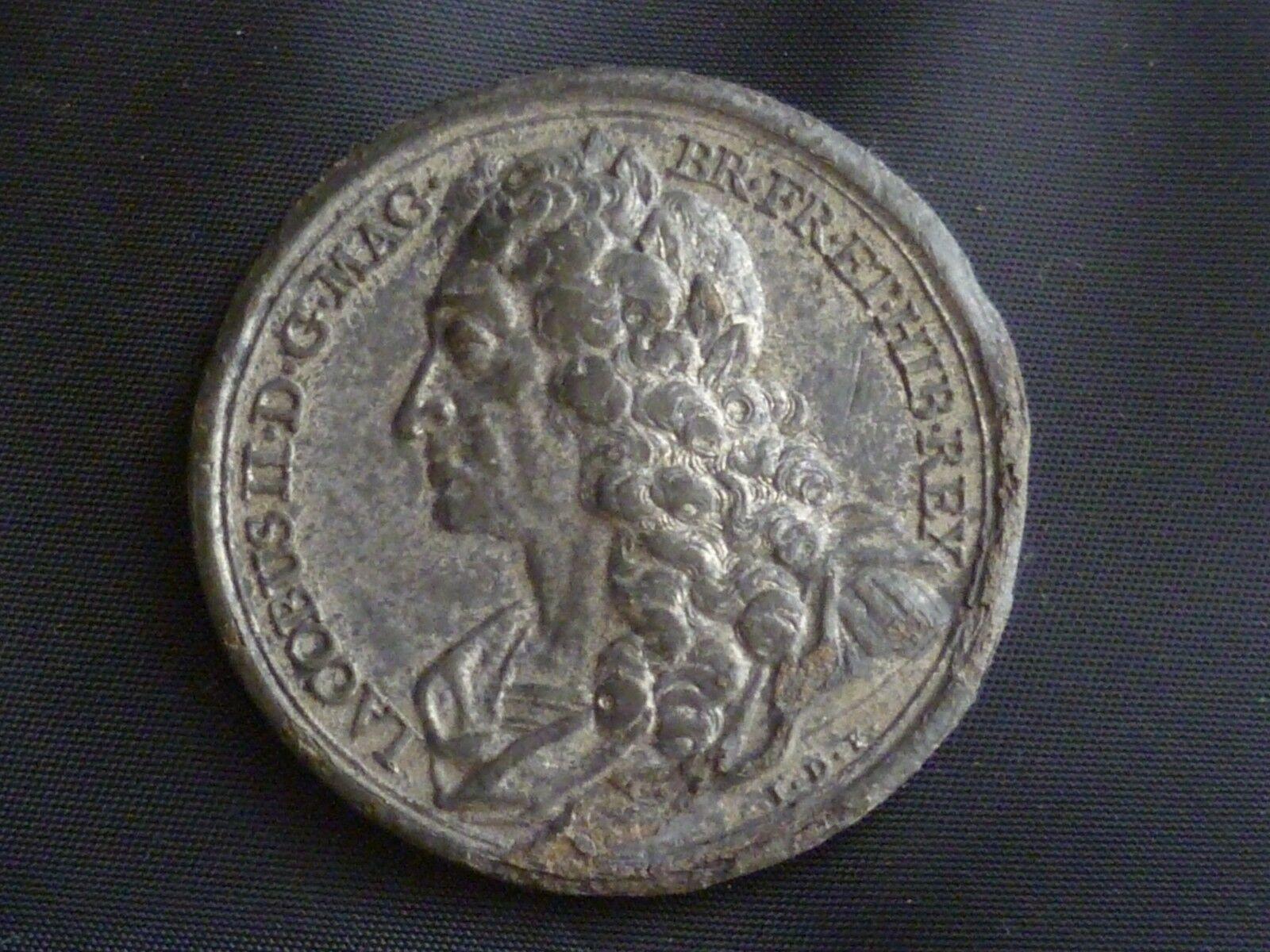 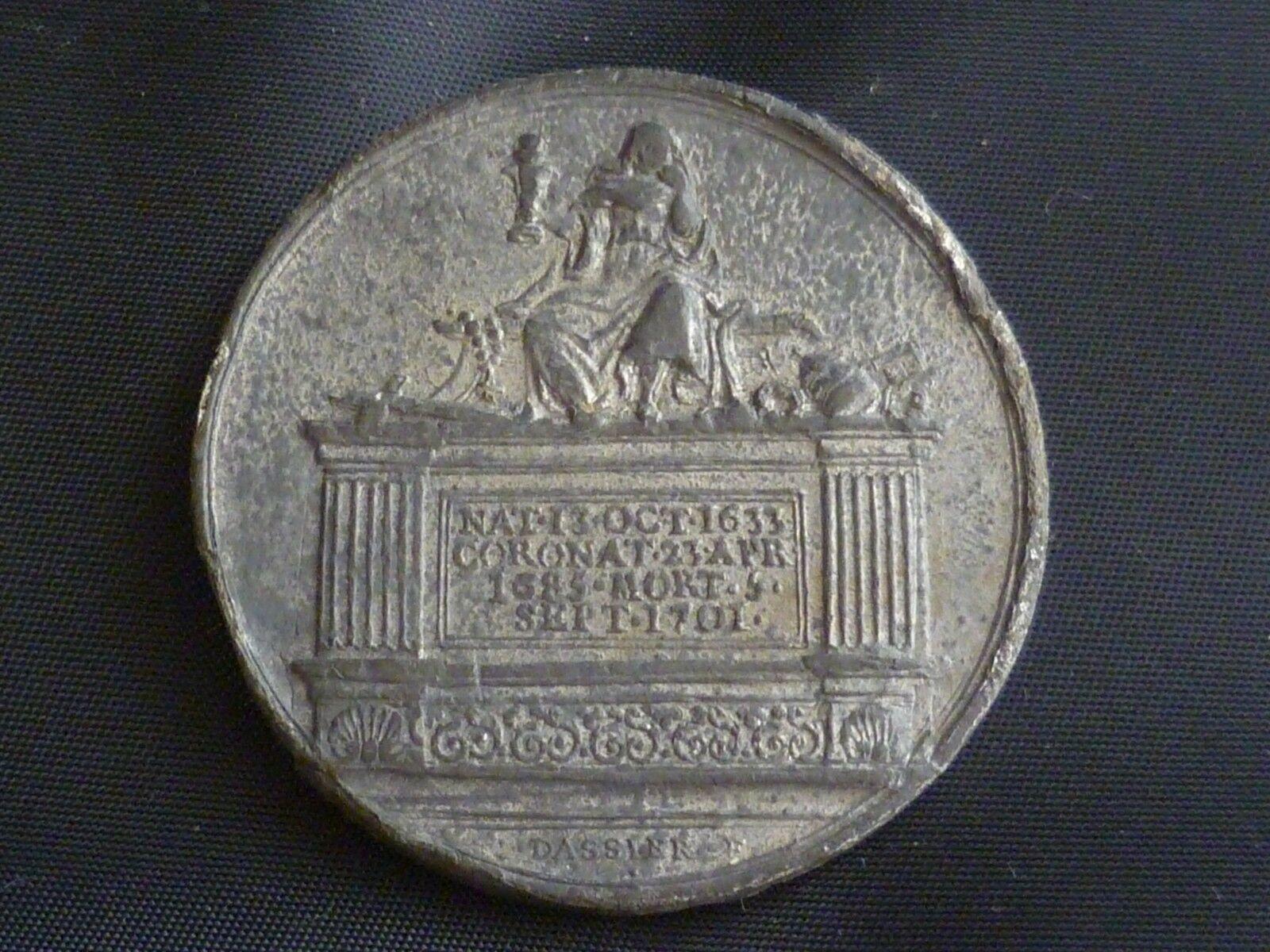 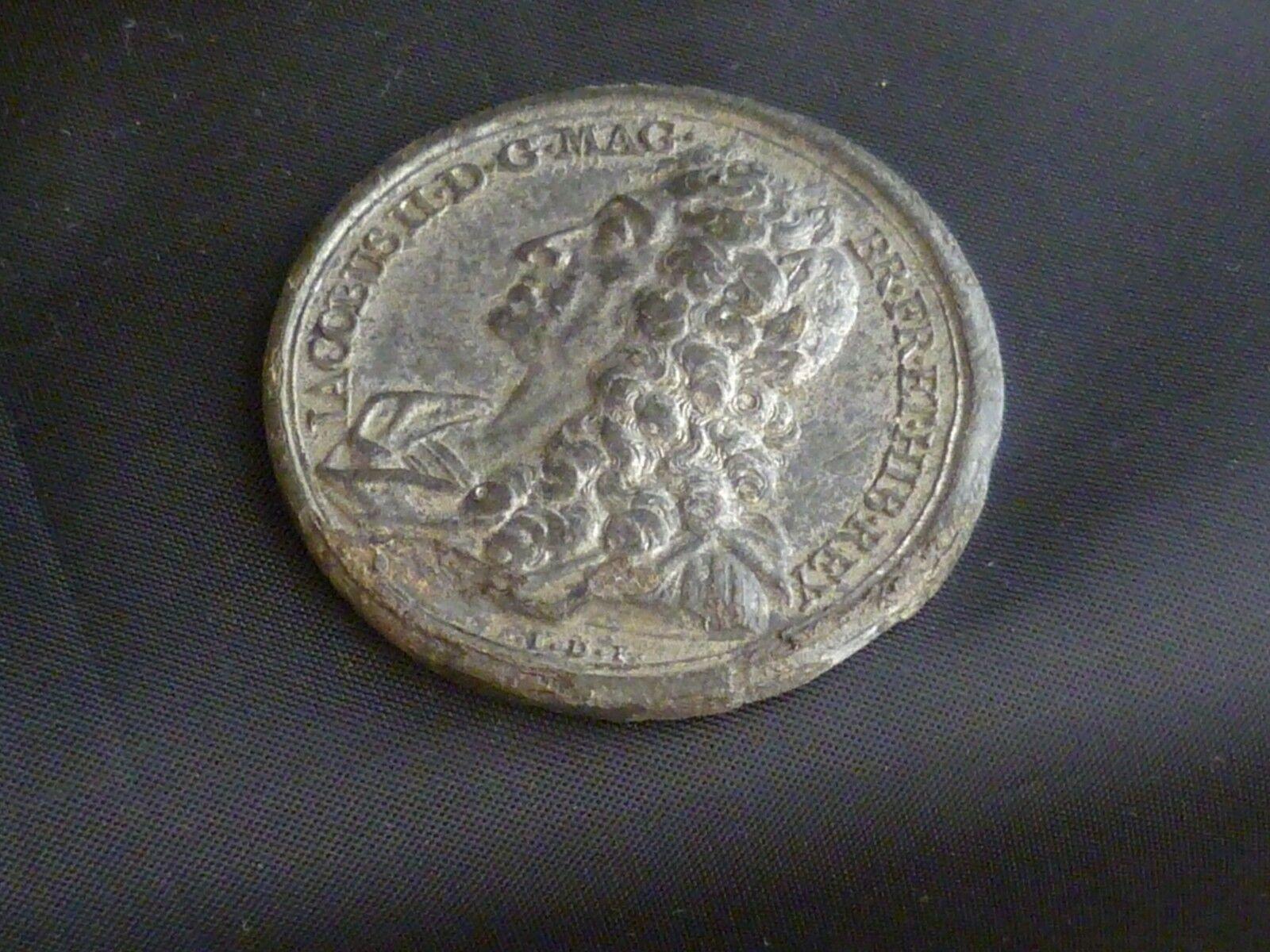 Rev: Tomb, upon which is seated the mourning figure of Religion, holding a chalice with a host, amid various ornaments of Roman Catholicism; a cross, crucifix on a chain, and a Papal tiara with the keys of St. Peter.  NAT. 13 OCT. 1633 CORONAT. 23 APR 1685 MORT. 5 SEPT. 1701

James II (1633 - 1701), Duke of York (1634-1685), and King of England, Scotland and Ireland (1685-1688), was the third son to Charles I and Henrietta Maria. During the Civil War he fled to France but returned to England and became king after the death of his older brother Charles II, who had been restored to the throne after Cromwell's Commonwealth collapsed. Unlike his brother, James maintained a strong adherence to the Roman Catholic faith. He married a Roman Catholic princess, Mary of Modena, and tried to convert England to Catholicism. His zealous piety and his determination to impress Catholicism on his subjects was to prove his nemesis.

Within days of James' accession, Protestants began rallying around Charles' son, James, Duke of Monmouth, whom they believed should be king. The rebellion was easily quashed and Monmouth was beheaded. Continuing his religious campaign, James had Catholics promoted to high-status positions while he appointed the 'Bloody Assizes' to execute, torture or enslave Protestant rebels. The Declaration of Indulgence (1687) granted tolerance of Catholics and non-conformists. In response, both Tories and Whigs turned against the king.

On the birth of his son, James was deposed in the Glorious Revolution of 1688, the Protestant Parliament having allied themselves with James' Protestant daughter Mary (Mary was the daughter of James’ first wife Anne Hyde, a Protestant who raised her daughter in the same faith), and her husband William of Orange, who eventually took the throne of England as William and Mary. That revolution, engendered by James’ Roman Catholicism, permanently established Parliament as the ruling power of England. James died an exile in Saint-Germain, the last Stuart monarch in the direct male line (Queen Anne being the last Stuart monarch). (From www.bbc.co.uk)

Firstly, thank you for looking at our auction. Please view our other items! And be sure to add us to your favourites list!

Quality of service is paramount to our business ethos and we encourage you to ask questions, as we believe communication is crucial for our business success and will endeavour to answer to the best of our ability.

We take high resolution scans or images, however, if further photos are required, please do not hesitate to ask.

We fill in condition reports as part of our listings and often this forms part of our description so do please do look at these also. With many items we sell however, such as coins, our photographs form a significant part of the description as they show many blemishes we sometimes miss.

All boxes used are for display purpose only, unless stated in the auction description. Please ask all questions you might have before bidding, note no guarantee can be given or implied.

Please do not provide an offer price for auction items as our belief is that all bidders/watchers have a fair chance of owning the item we are selling. This has often been to our cost historically but does provide a level playing field.

Finally, thanks again for looking and good luck bidding!!